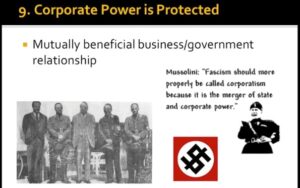 To be on the left is to say you are a socialist. Socialism is defined as a government where all the markets are owned and controlled by government. They run the businesses, hire people to fill the jobs, they keep the profits to build infrastructure, pay wages, etc. The idea is that a well-run socialist country could be a utopia with the best of all resources provided to the citizens equally.

I’m against that and so are real Democrats. A citizen democrat. Not a corporate Democrat who has sold out to the money in politics. A real Democrat who supports the United States Constitution and that for which it stands.

A living document, the Constitution is supposed to change over time to adapt to the real world so that it can continue to serve and fulfill the goals it has outlined. Just as our laws are supposed to. The first example is the Bill of Rights. A group of Amendments which outlined further what was intended by the founding fathers in the Constitution.

Over time Postal routes became roads, technologies changed, farming changed, and progress happened. Some of the changes have regrettably not been consistent with the intention of the constitution and some have.

As the right and fascism have gained more momentum since it last raised its ugly head before and was put down during World War Two. Those forces have waged a new war by some of their wealthiest members like the Koch brothers, powerful members like Hoover, Nixon, and Reagan all working against the intentions of our constitution. Nixon promoting the ‘southern strategy’ and heading a criminal conspiracy to retain power, Watergate.

Reagan attacked the labor unions who previously forced the oligarch class to honor our Constitution and our society and he changed the laws regarding CEO compensation with stock. That provided the tools needed to destroy our competitive markets and the stock market. Converting the stock market into the gambling arena for the wealthy that it has become. The place where they share their stolen profits gained by paying labor a legalized minimum slave wage. Denied Healthcare by our government as other nations do, our’s has been profitized and corporatized and is the tool of leverage to control labor and divide us. The ‘have healthcare’ and the ‘have nots’.

The tools that were used to destroy the competitive markets were the CEO’s. Motivated by their greed. They know they are telling lies while they say their obligation is to bring profits to the shareholders as an excuse to destroy the organization, society, and shareholders as they whittle it down to eventually sell it to the oligarchs. Not honorable businessmen protecting their customers and their society but destroying them for their personal gain. GREED. Pure, vile evil, and simple when enabled by perversions placed in our laws by some who thought they were doing good and many who knew they were not. 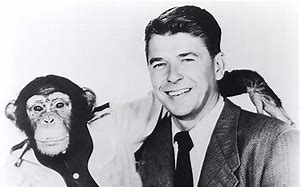 The CEO’s enabled by the ‘Bedtime for Bonzo’ star’s assault on labor unions and perversion of the stock compensation laws, trimmed operations and payroll to get short term profits, retire, get their golden balloons, and get their stock converted quickly before they fail as they planned. When those companies later failed because they were stripped for short term profits with no investments in labor, equipment, or growth, the oligarchs bought them up.

Then they did it to our family homes and equities in 2008. 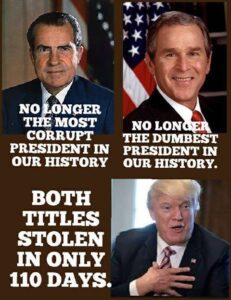 Then they did it to our environment, laws, healthcare, decency, our Constitution, human life on this planet, goodness itself. So much so that if we don’t change course NOW, soon the earth will be peaceful and beautiful and devoid of human life.

Without the benefit of a fair wage the people who used to start small businesses now must work two jobs and can’t save anything to start a business. If they could most Americans cannot afford to buy what they would produce anyway as they too are being paid a legalized minimum slave wage. Those fortunate enough to be in the top percentage with corporate medical insurance and sharing in those stolen profits have also provided the funding to the propaganda outlets joining in the efforts of the former John Birch society members like the Koch brothers.

I’m sickened to see that fascism and right wing thinking have so permeated our society that many now consider the efforts of good Democrats who are against socialism and communism , against fascist dictatorships led by individuals or oligarchies, and FOR a Middle-of-the-Road course fulfilling what our Constitution has provided for and are instead being scapegoated and called left wing radicals.

Such is the fight to get the Law and the Intent of our Constitution back and again quash the forces of evil. We must educate and inform against the propaganda. Educate to overcome the lack of historical perspective and knowledge denied to many by our education system which has also been under as attack by the extreme right as our labor unions and poor have been.

See the 14 defining characteristics of fascism, items 3, 11 and others, before you accuse good people of supporting, or even being, radical-left-wingers. You should consider what your position is, stop making accusations at others, and start supporting the efforts of good people who support our Constitution.

It is interesting and ironic that the fascist oligarchs running our government are acting like the socialists they accuse good Democrats of being. They own most of the means of production in our country. Specially the things only a fascist government and people would support their owning. 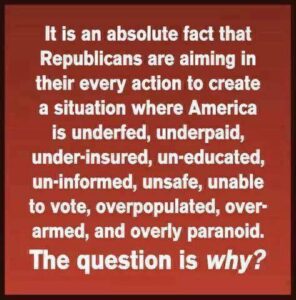 They used to own our representatives more and more over time. Now, they are the representatives and own the political offices for THEIR PROFITS instead of distributing that wealth to the American people, improving our infrastructure, improving the health, education, and general welfare of the American citizens as a good socialist government would. Or is intended a Constitutional government would.

They do not even honor some of those same intentions as is dictated by our Constitution and the oaths to it they took which we fight for. No, instead those profits going into their pockets. Just as they do in Russia and other fascist oligarchy run dictatorships. While they use fascist techniques of scapegoating, accusing their victims of doing and being what they themselves do. Project their evil onto minorities, the educated, and anyone who will get in the way of the destruction of all that is good. Use their money and control of the laws to destroy them and promote their racist, traitorous, fascist goals with their own propaganda networks of which, sadly, the primary propaganda outlet is now only one of many.

They almost have us fully there. In November we decide one way or the other and then we become the great country with the American dream, or they solidify their fascist dictatorship and we return the the late 1800’s with modern tools.

Learn the definitions of the various types of government. Learn the weapons the fascists use. If you want to do as the German people did and remain silent and allow the fastest to take what little of the intention of our 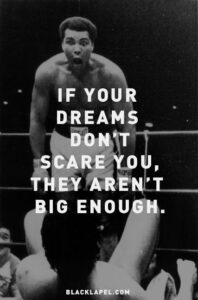 constitution which remains away, then stay quiet. But, for all our l sake’s, please at the very least, don’t join the fascists in their false accusations or abuses. Do your responsibility as an American to vote wisely to eliminate the threat to us and our Constitution and by voting for Democrats.

To do otherwise is to become the final tool of our destruction. Acting just as the fascist’s want having spent vast amounts to change our government and brainwash you into becoming the tools granting their wishes. Don’t be the people who decided to destroy us and embrace ignorance, living in misunderstanding, and creating the new reality we seem to be headed for. A reality rightly called Hell-on-earth. 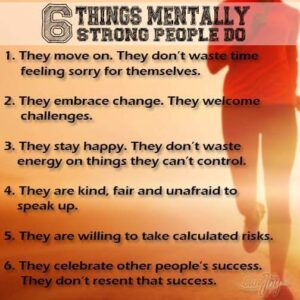 Don’t be a destroyer. Be a lover. Don’t be an ignorant conservative. Be a liberal like Jesus was. Be a progressive like good Democrats are. Like FDR was. Like Eisenhower and MLK, Kennedy, Arthur C. Clarke, and many other great liberal humanitarians. republican and democratic, were great progressives fighting for our future and warning us against the military industrial complex and greed, and evil, and death.

And don’t call a ‘devoted to life, liberty, and the pursuit of opportunity for all and happiness for as many as is possible Democrat’ a disgusting Anarchist, Socialist, Communist. Or, generally engage in the behavior found in the 14 defining characteristics of fascism and engage in scapegoating others. By doing so you define yourself for all to see that you one of them and not one of us.

Good Progressive Americans work together to honor, support, and grow the intentions found in our Untied States Constitution so much that even if you must embrace the sentiments outlined in our Declaration of Independence, you will! For certainly to do otherwise will result in the end of our democratic experiment on so large a scale it very well may end with the extinction of human life.
VOTE WISELY !

This site uses Akismet to reduce spam. Learn how your comment data is processed.